The administration at The Epiphany School of Global Studies plays a vital role in achieving day-to-day operational success as well as in propelling us toward our long-term goals. While the Headmaster and Director of Finance oversee large-scale strategy and planning, the principals of the Primary School, Elementary School, Middle School, and Upper School focus on achieving particular goals of students and teachers at specified levels. In close coordination with these leaders, our Directors of Global Education, Advancement, Community Engagement, Admissions, Athletics, and Learning Specialist work together to successfully broaden the educational opportunities for students at The Epiphany School of Global Studies. 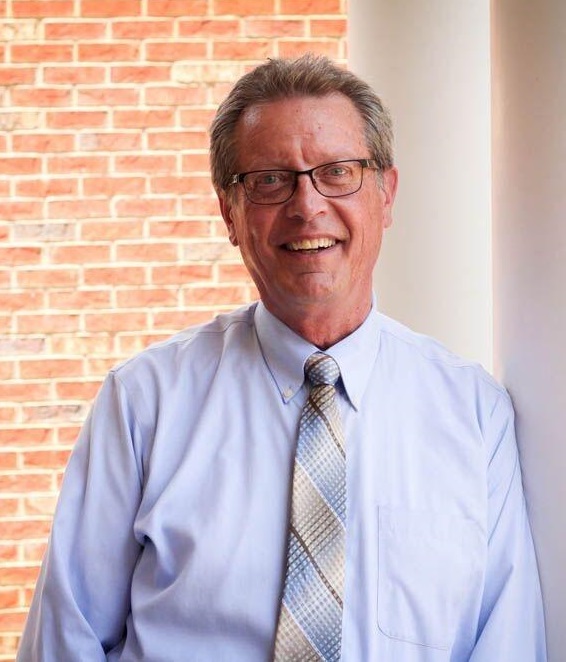 Dr. Carlblom was raised on a grain farm in southern Minnesota and always wanted to be a farmer.  God had other plans, however.  He met his wife-to-be while in college, married, and had two beautiful daughters​ that they raised while teaching and heading an international school in Malaysia for 22 years.  After the girls were off to college and married, Dwight and Lori moved to South Korea where they worked for 5 years.  They also spent 6 years in Minnesota teaching and then serving as VP of Student Development at Crown College.  Dr. and Mrs. Carlblom are the proud grandparents of 6 of the most amazing children, three of whom live in Alabama and the other three in Malaysia.  His daughters tell him that 6 is the limit!​

The son of a US Navy officer, David moved often growing up and split time between the West Coast and East Coast.  He graduated from Lake Braddock Secondary School in Burke, Virginia, in 1989.  David earned his bachelor of arts degree in English from Davidson College in 1993 and later his Master's degree in School Administration from East Carolina University in 2009.

David began his career in education as an English teacher at East Forsyth High School in Kernersville, North Carolina, followed by a teaching position at Rockingham County High School in Wentworth, North Carolina.  In addition to his teaching roles, David has coached soccer, golf, and swimming at the varsity level.  Currently, he serves as the Varsity Men's and Women's Swim Coach at Epiphany.

David is the Assistant Head of School and Director of Upper and Middle Schools for Epiphany and focuses on academics for grades 6-12 for the school.

Dr. James grew up in Morehead City, NC where she attended K-12 public schools. She was a competitive gymnast in her youth and transferred those talents to cheerleading, where she captained the co-ed cheerleading team at Appalachian State University for 2 years. While there, she earned a BS in Business Administration with a concentration in Marketing and then went on to earn a Master’s Degree in Teaching from East Carolina University. While at ECU, she met her husband Matt James and they moved to New Bern in 2009 to be close to family.

After receiving her Master’s Degree, Dr. James taught Career and Technical Education courses at Havelock High School where she became passionate about students who learn differently. She then set her sights on working with college students at East Carolina University and has since worked with the ECU STEPP Program for the past decade. While working at ECU, Dr. James earned her Doctorate in Educational Leadership in Higher Education Administration. Dr. James enjoys running, baking, learning new things, and spending time with family and friends.

As the Director of Learning Services, Dr. James is passionate about helping students achieve their learning goals, gain confidence and self-advocacy, and prepare for success in college and beyond.

Ryan grew up in Raleigh before attending Appalachian State University, majoring in History while minoring in Latin & English. From there, he set off to the University of Georgia, earning a Master of Arts degree in Latin. Ryan has taught Latin in secondary independent schools since 2002, as well as Greek, Ancient History, Classical Literature, and English writing courses. In 2008, he took a hiatus from teaching to become the Director of Youth Programs at the Chapel Hill-Carrboro YMCA, where he was the director of Camp Clearwater, a summer co-ed day camp serving 200 children and 25 counselors. Ryan also spent 12 summers on staff at Camp Sea Gull in Pamlico County. In 2010, he felt the call to return to teaching and moved his family to New Bern so that he could teach English and Latin at Epiphany. During his time at Epiphany, Ryan has been Athletic Director, Director of Middle School, and trip leader to several European trips.

Ryan is the Director of Student Life, for Grades 6-12, and focuses on all of the non-academic aspects of students' lives at Epiphany.

A native New Yorker, Tahira graduated from the Horace Mann School, where she took five years of German.  She completed her first of many study abroad experiences as a summer exchange student living in a rural village near Duesseldorf. After high school, Tahira graduated cum laude from The Johns Hopkins University, with a dual concentration in Psychology and German.  She then returned to Germany where she spent a year as a Fulbright Fellow assisting in a German high school in Dortmund. Additional overseas adventures of hers included teaching at an international boarding school in the Swiss Alps, where Tahira further solidified her love for global education and learned to ski.  Tahira earned her Master’s Degree in German from Middlebury College during summers while teaching during the school year. Over the past two decades, Tahira continued to work as a teacher and administrator at independent and international schools, including The Spence School and The German International School of New York.

Tahira and her family chose to move to New Bern in large part due to the academic, faith and community experience the Epiphany School of Global Studies offers their two children.  Tahira enjoys travel, cooking, yoga, reading, learning about other cultures, and most of all, spending time with her family. She looks forward to serving the Epiphany School of Global Studies as its Director of Admissions for years to come.

Matt grew up in Bethel, NC (Pitt County) and graduated from North Pitt High School in 1996. He received his Bachelor of Science degree in Business Administration and Finance from Barton College in 2000. At Barton, Matt played baseball for 4 years, receiving All-Conference accolades in 1998.  After graduation, he began his teaching career at Red Oak Middle School in Nash County, while also assisting the Northern Nash HS baseball team. In 2003, Matt left education to enter the business sector, to include insurance sales, home sales, and the retail furniture industry. During this time, he enrolled at East Carolina University to pursue his Master of Arts in Teaching. While in graduate school, Matt met his wife, Morgan, who was also completing her graduate work. After receiving his Master’s, he began teaching and coaching at White Oak HS in Jacksonville, NC. During his time in Onslow County, Matt was also the head baseball coach for Post 265, Jacksonville’s American Legion Baseball team. Matt began teaching and coaching at Havelock HS in 2009. He became the head coach of the baseball program in 2013.

Matt and Morgan have been married since 2008 and have two daughters, Emma and Julie.

As the quintessential military child, Sandy grew up on the move. By the time she graduated high school, Sandy had gone to school in six states and spent three years in Belgium. Her favorite family saying was “always bloom where you are planted,” and she took that to heart as she worked to make new friends and become involved in each new community.

After high school, Sandy earned her undergraduate degree from James Madison University and then moved to Raleigh. While there, she met Jeffrey on a blind date to the State Fair.  She’s still not sure if it was the funnel cakes or scary rides that convinced her, but something clicked and she eventually moved to New Bern to marry Jeffrey.  Once there, Sandy joined several community organizations - eventually serving as the President of the Junior Chamber of Commerce and graduating from the Leadership Craven program.  Her priorities changed when her beautiful children, Emily and Jacob (twins), were born a few years later.  As her own children entered school, Sandy felt called to return to teaching.  After completing a Master of Education program at Liberty University, she joined the Epiphany staff in 2010.

Since then, Sandy has played many roles at the school, but her greatest joy has been in serving as the Director of Global Education since 2016.  Sandy finds opportunities for Epiphany students to build connections with people and communities in places far from home – connections that teach us to look past the lines on a map and remind us that our similarities outweigh our differences.

Grew up in California and married a Carolina sweetheart. In college, I studied computer engineering but ended up graduating in business. After school, I owned/operated a business in Raleigh for 7 years before moving to Charlotte and starting one there. Eventually, I sold the business and went back to school for computers and became an instructor at a computer/technology training school. After 5 years of teaching, I went to work for a progressive marketing and customer acquisition company. This company evolved into a billion dollar company and I was Director of Operations and Director of IT Security.

New Bern has always been a favorite from years of vacationing at Atlantic Beach and Emerald Isle and we decided to make it our permanent home in 2015.

For the next seven years, Michele remained in the Wake County area and taught English and Latin at the high school level. During this first phase of her career, she earned her National Board Certification and was named English Department Chair and Teacher of the Year at Franklin Academy in Wake Forest, NC.

When her childhood home went on the market, Michele and her husband, also a New Bern native, decided to return to the area. Michele came to Epiphany in 2014 as an English and Latin teacher. That same year she completed her MA degree in Children’s Literature at Hollins University. After two years of immersing herself in all aspects of Epiphany, she applied to become the school’s College Counselor. For several years, she had been helping first generation students apply to college. With her natural ability to work with a wide variety of young people, she felt called to help her students navigate the constantly changing waters of college admission as well as champion their goals and dreams.

Michele has transformed Epiphany’s College Counseling program into a personalized experience that allows her to work with students from the very beginning of their Upper School journeys. In 2019, the College Board included her in its inaugural Counselor Recognition Program, and she has been chosen for the initial cohort of the Southern Association for College Admission Counseling’s SACAC Leads program for the Spring of 2021.

When she is not discussing standardized testing policies or how to find balance in one’s extracurricular activities, she is traveling, hiking, camping, or reading. She has led or assisted with Epiphany trips to Guatemala, Mexico, Italy, Costa Rica, and Belize. The DeCamps are one of several “all-in” families at Epiphany; Michele’s husband teaches all of the Upper School physical science courses and her daughter is a 4th grader in the Lower School. They consider Epiphany’s Henderson and Trent campuses their second home and love being a part of this wonderful community.